In the oral argument of Torres v. Madrid on Wednesday, the justices tried out all the tools of constitutional interpretation as they worked through the meaning of the critical Fourth Amendment term, “seizure.” How they rule will answer one of the last remaining questions in this context: Is there a Fourth Amendment “seizure” when the police shoot a fleeing suspect who is injured by the bullets but does not stop? 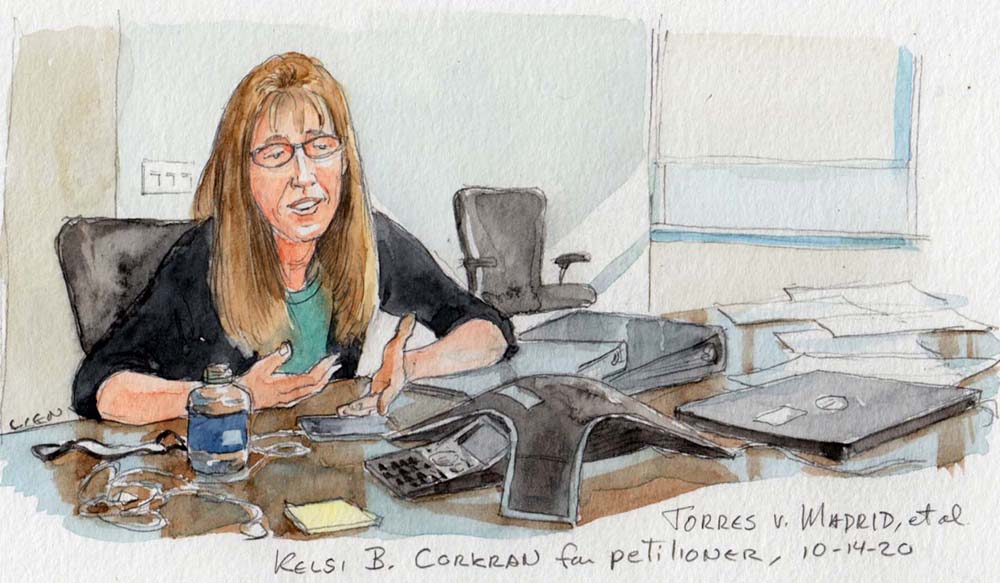 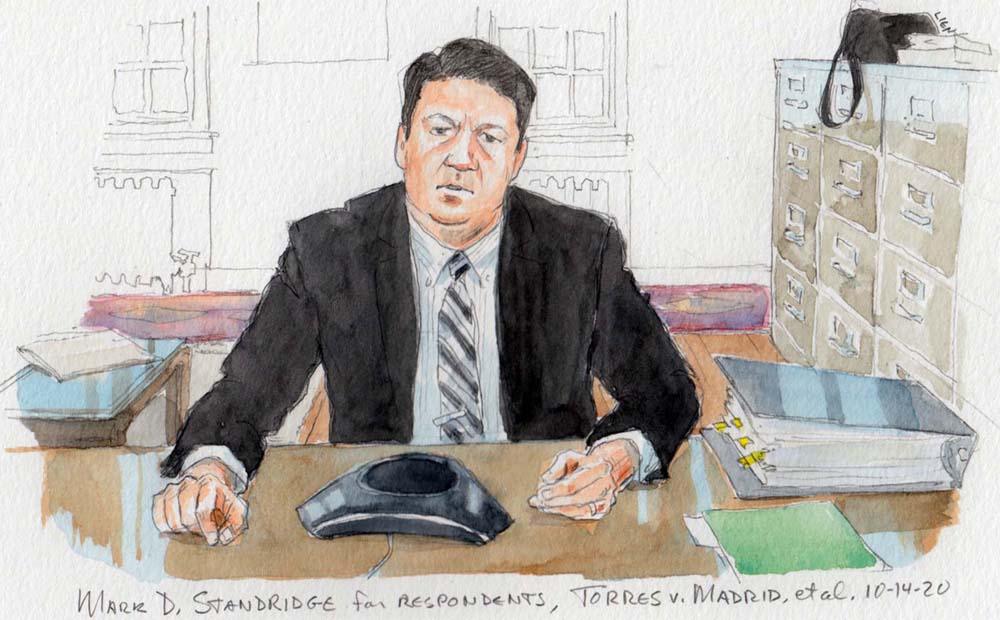 Kelsi Corkran argued on behalf of Roxanne Torres, a New Mexico woman who was shot twice by state police before driving away from the scene. She had support from Rebecca Taibleson, who appeared as a “friend of the court” on behalf of the United States. Mark Standridge argued for the police officers, Janice Madrid and Richard Williamson. Torres claims in a civil rights lawsuit that the officers violated her Fourth Amendment right by committing an unreasonable seizure when they shot her. The officers’ defense is that the shooting did not constitute a seizure at all.

As I mentioned in my case preview, the easiest resolution of the case would be for the court to simply follow its precedent. Justices Sonia Sotomayor and Elena Kagan endorsed this approach, noting that, in the 1991 decision California v. Hodari D., the court crafted a definition of “seizure” that clearly captures the shooting in this case: “a laying on of hands or application of physical force to restrain movement, even when it is ultimately unsuccessful.” Justices Clarence Thomas and Neil Gorsuch emphasized in their questioning, however, that this language was dicta, or not essential to the outcome of that case and thus nonbinding on future decisions.

Illustrating the centrality of this issue, Kagan read a series of passages from Hodari D. and noted that the language appeared “all over the opinion,” cropping up “six times [in] only a seven-page opinion.” To Kagan, this was not the kind of “stray statement” that could be easily disregarded. Strengthening this point, Taibleson offered a ringing endorsement of stare decisis in this context, stating that “the United States’ interest here is in establishing a clear and predictable rule that law enforcement can apply in the heat of the moment in the field, and we think the rule established in Hodari D. achieves those ends.” While Taibleson acknowledged that the United States had taken a contrary position in 1991, she explained, “we didn’t … feel comfortable simply, you know, running it back.”

Whether or not he appreciated Taibleson’s pitch-perfect basketball reference, Justice Stephen Breyer seemed similarly swayed by the need for a clear line, stating, “We need a line that’s somewhat bigger than the one [the officers] propose.” For Breyer, the line the court drew in Hodari D. is “as good a line as any.”

For the conservative justices attracted to the officers’ narrow “seizure” definition, the existence of contrary precedent is only part of the problem. There is the added fact that Hodari D. is an originalist precedent written by Justice Antonin Scalia. In his opinion for the court, Scalia wrote that, under the common law at the time of the Framing, “the mere grasping or application of physical force with lawful authority, whether or not it succeeded in subduing the arrestee, was sufficient” to constitute a seizure. This prompted Justice Brett Kavanaugh to press Standridge to acknowledge that, “you’re arguing, as I understand it, that Justice Scalia and really all nine justices in that case were wrong about the original meaning of the Fourth Amendment.” Kavanaugh similarly pushed Taibleson on this question, with Taibleson ultimately affirming that the United States’ official position was that Scalia got the history right. Sotomayor fanned the flames, wryly noting that Scalia was “very much was an advocate of the common law and … quite well informed about it generally.”

With this array of originalist forces against him, Standridge contended that the court should “reject historic relics that are not suited to the modern era” in favor of rules that “have evolved through the process of interpreting the Fourth Amendment in light of contemporary norms and contemporary conditions.” Curiously, it was the court’s conservatives who seemed most receptive to this argument. Gorsuch questioned the applicability of the Framing-era cases that, he said, primarily concerned “Dickensian debt collection practices.” Thomas suggested that the cases might be distinguishable because they arose outside the criminal context and involved direct applications of force. Justice Samuel Alito pointed out that none of the cases involved shootings. There seemed to be an irony here in light of the proceedings unfolding at that same moment across the (virtual) street. At the same time that Judge Amy Coney Barrett was extolling the clarity of originalism in her confirmation hearings in the Senate, the court’s most prominent originalists seemed to be suggesting that Framing-era precedents offered little insight into the proper application of the Constitution in a modern context.

The justices returned to more familiar territory as they sparred over the plain meaning of the term “seizure.” The officers’ strongest textual argument is that the term’s ordinary meaning does not apply to unsuccessful attempts to restrain someone. To illustrate the point, Gorsuch deployed the day’s most extreme hypothetical, conjuring up a driver who “blast[s] through” roadblocks “at 100 miles an hour” with police “bazookas” (!) firing all around, and yet suffers only a scrape. Alito picked up the thread, asking about “a baseball pitcher [who] intentionally beans the batter.” Thomas added a question about someone hit by “a snowball.” None of these instances, the justices suggested, fit the term “seizure.” The examples prompted Kavanaugh to challenge Corkran to explain “why shouldn’t we just follow the ordinary usage of the term ‘seizure.’” In an apparent appeal to the justices aligning against her, Corkran responded that “it’s the ordinary meaning at the time of the founding that controls.”

The justices’ hypotheticals arguably underplayed an important fact about Torres’ claim. Torres was not only shot but felt the effects — including (she alleges) temporary paralysis. That the bullets did their damage in the blink of an eye may be causing the justices to overlook their severe impact — damage that would have been readily apparent if occasioned by traditional physical contact. This point surfaced when Sandridge responded to Justice Alito’s question about an officer who “grabs [a] person’s shirt … for a couple seconds,” by acknowledging that this would be a (momentary) seizure. Sotomayor picked up on the exchange in regard to Torres’ claim, asking Standridge how grabbing a shirt for a few seconds “is more of a seizure than putting a bullet in someone.”

An undercurrent in the questioning concerned the societal significance of the case. A broad understanding of the term “seizure” would permit greater judicial scrutiny of excessive police force at a time when the country is increasingly concerned with police violence. Early in the argument, Sotomayor asked Corkran to “explain why this case is so important.” Corkran obliged, noting that the narrow definition of seizure sought by the officers would leave “all sorts of abuses by the government” outside of the constitutional framework. Breyer emphasized the point, stating that the officers’ argument left “the right of the people to be secure in their persons” without “much protection — a whole area [with] no protection at all.”

Gorsuch and Alito sounded a contrary note, asking both sides whether the suit could have been filed as a civil claim for battery in New Mexico state court. The consensus seemed to be that it could have been, but for the statute of limitations. Standridge drew on his local practice in New Mexico to push back on skepticism of the potential for state law remedies to excessive police force:

I believe I can represent, as an officer of this court and the state courts of New Mexico, that it is likely an assault or battery claim brought by … a plaintiff such as this petitioner would[] survive summary judgment and would likely have to have been resolved at trial.

After argument, the case feels closer than expected. Things can always change as the justices dig into the record, but at the moment, I count three votes for Torres and three for the officers, with the outcome hinging on the two remaining justices – Kavanaugh and Chief Justice John Roberts – who did not tip their hands.