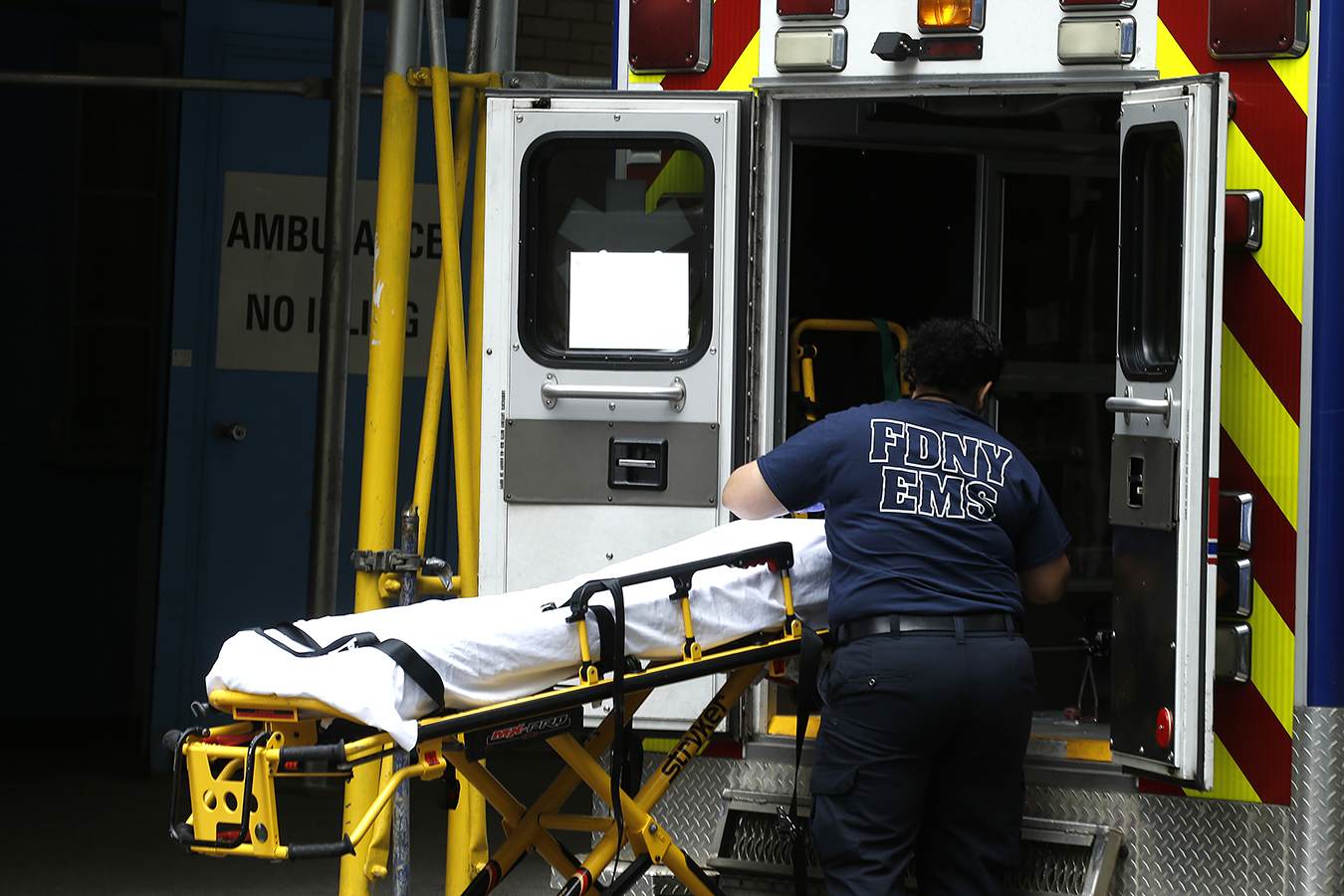 In his 17 years as an emergency medical provider, Anthony Almojera thought he had seen it all. “Shootings, stabbings, people on fire, you name it,” he said. Then came covid-19.

Before the pandemic, Almojera said it was normal to respond to one or two cardiac arrests calls a week; now he’s grown used to several each shift. One day last spring, responders took more than 6,500 calls — more than any day in his department’s history, including 9/11.

An emergency medical services lieutenant and union leader with the New York City Fire Department, Almojera said he has seen more death in the past year than in his previous decade of work. “We can’t possibly process the traumas, because we’re still in the trauma,” he said.

EMS work has long been grueling and poorly paid. New FDNY hires make just over $35,000 a year, or $200 more than what is considered the poverty threshold for a four-person household in New York City. (That figure is on par with national averages.) Employee turnover is high: In fiscal year 2019, more than 13% of EMTs and paramedics left their jobs.

But covid-19 has added a new layer of precarity to the work. According to Oren Barzilay, the Local 2507 union president, nearly half of its 4,400 emergency medical technicians and paramedics have tested positive for the covid virus. Five have died, though that figure doesn’t account for first responders who worked for private emergency response companies. Nationwide, at least 128 medical first responders have died of covid, according to Lost on the Frontline, an investigation by KHN and The Guardian.

The problem of EMS pay was in the spotlight in December, when the New York Post outed paramedic Lauren Caitlyn Kwei for relying on an OnlyFans page to make extra money. Kwei, who works for a private ambulance company, wrote on Twitter: “My First Responder sisters and brothers are suffering … exhausted for months, reusing months old PPE, being refused hazard pay, and watching our fellow healthcare workers dying in front of our eyes.” She added: “EMS are the lowest paid first responders in NYC which leads to 50+ hour weeks and sometimes three jobs.”

Almojera earns $70,000 annually as a lieutenant, but his paramedic colleagues’ salaries in non-leadership roles are capped at around $65,000 after five years on the job. He earns extra income as a paramedic at area racetracks and conducting defibrillator inspections. He has colleagues who drive for Uber, deliver for GrubHub and stock grocery shelves on the side. “There are certain jobs that deserve all your time and effort,” Almojera said. “This should be your only job.”

For Liana Espinal, a paramedic, union delegate and 13-year veteran of the FDNY, a sense of camaraderie and the opportunity to serve her fellow Brooklynites compensated for low pay and exhausting shifts. For years she was willing to take on overtime and even a second job with a private ambulance company to make ends meet.

But covid changed that. The department switched from eight- to 12-hour shifts last summer, leaving Espinal, a single mother of three, too exhausted to pick up overtime. Like many health care workers, she isolated from her children at the outset of the pandemic to avoid potentially exposing them to the coronavirus, leaving them in the care of her own mother; she described being separated from her 1-year-old son as “devastating.” Despite working round-the-clock to get the city through the early days of the pandemic, she often had to choose between paying rent on time or paying utility bills.

“After working this year, for me personally, it doesn’t feel worth it anymore,” she said. She is two exams shy of finishing a nursing degree she started studying for before the pandemic. She said the last year has only strengthened her resolve to shift careers.

The pandemic has disproportionately claimed Black and brown lives — Black and Hispanic people were significantly more likely than white people to die of covid — and those disparities extend to health care workers. Lost on the Frontline has found that nearly two-thirds of health care workers who have died of covid were non-white.

All five of the department’s EMS employees who died of covid were non-white.

They included Idris Bey, 60, a former Marine and 9/11 first responder who was known to stay cool under pressure. He was an avid reader who bought new books each time he got a paycheck.

Richard Seaberry, 63, was looking forward to retiring to the Atlanta area to be near his young granddaughter.

Evelyn Ford, 58, left behind four children when she died in December, just as the coronavirus vaccine became available to first responders in New York City. According to the City Council’s finance division, 59% of EMS workers are minorities.

Almojera and Espinal see a racial component to pay disparities within the FDNY. Firefighters with five years on the job can make more than $100,000, including overtime and holiday pay, whereas paramedics and EMTs cap out at $65,000 and $50,000, respectively. According to the City Council finance division, 77% of New York firefighters are white.

“My counterpart fire lieutenants make almost $40,000 more than me,” Almojera said. “I’ve delivered 15 babies. I’ve been covered head to toe in blood. I mean, what do you pay for that? You can at least pay us like the other 911 agencies.”

A spokesperson for the FDNY declined to comment on pay.

The last year has also exacted an emotional toll on an already stressed workforce. Three of the FDNY’s EMS workers died by suicide in 2020. John Mondello Jr, 23, a recent EMS academy graduate, died in April. Matthew Keene, 38, a nine-year veteran, died in June. Brandon Dorsa, 36, who had struggled with injuries from a 2015 workplace accident, died in July.

Family and colleagues told local news outlets that Mondello and Keene were struggling with trauma as a result of the pandemic. Last spring, New York Mayor Bill de Blasio and first lady Chirlane McCray announced a partnership between the U.S. Department of Defense and city agencies to help front-line health workers cope with the stress of working through the pandemic. But many EMS workers have said that the program has been difficult to access.

“There aren’t a lot of resources for people, so a lot of EMS internalize what they go through,” Almojera said. “It’s not normal to see the things that we see.”

Issues regarding pay and mental health challenges predate the pandemic: A national survey conducted in 2015 found EMS providers were much more likely than the general population to struggle with stress and contemplate suicide.

Almojera knew Keene and last spoke with him a week before his death. “You can’t say enough nice things about the guy,” he said. “I wish he had mentioned even a hint of [his struggles] on the phone. And I would have shared how I was feeling through all this.”

He said he has felt a mix of pride, exhaustion and resignation over the past year. “I’ve seen the magic that you can do on the job,” Almojera said. “And I’ve seen my brothers and sisters on this job cry after calls.”

Almojera is now representing his union in talks with the city to renegotiate EMS and paramedic contracts. He said he hopes that city officials will think of the hardships he and his fellow first responders endured over the past year when they come to the negotiating table to discuss pay raises. But early talks have not been encouraging.

“After all the sacrifices made by our members,” he said. “I don’t know whether to be angry, flip the table, or just shrug my shoulders and give up.”

This story is part of “Lost on the Frontline,” an ongoing project from The Guardian and Kaiser Health News that aims to document the lives of health care workers in the U.S. who die from COVID-19, and to investigate why so many are victims of the disease. If you have a colleague or loved one we should include, please share their story. 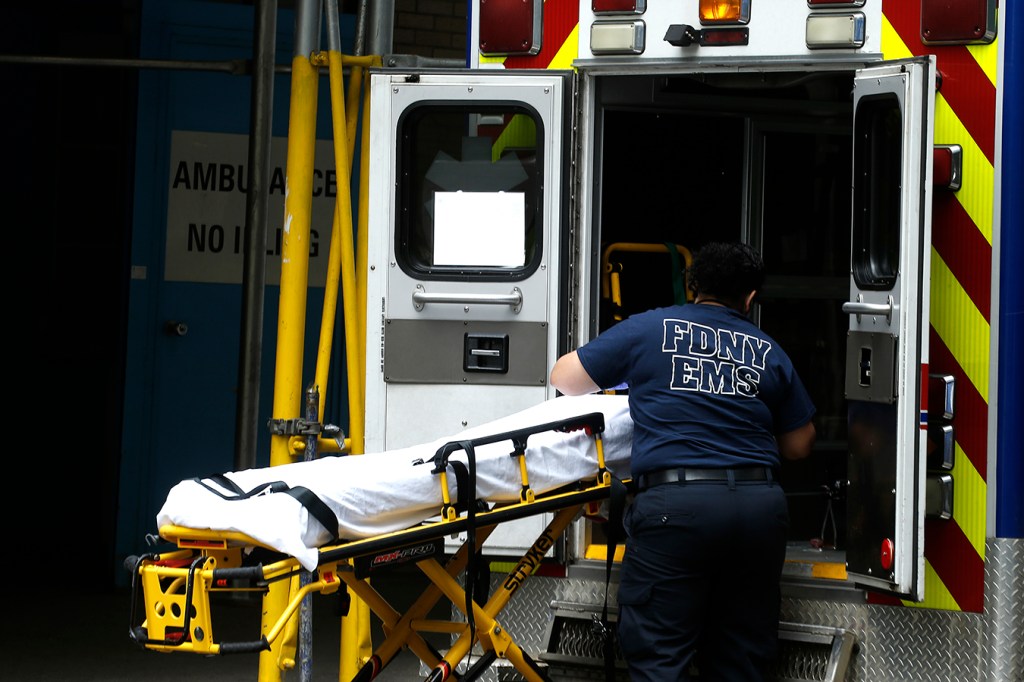