SACRAMENTO — In California, the cradle of renowned tech startups and the Silicon Valley, elementary school students have had to figure out how to work remotely, but lawmakers have not.

Since March, Californians have scrambled to comply with public health orders that required most office and school work to occur at home. But in one of the most iconic office spaces in the state — the Capitol building in Sacramento — most lawmakers and their staffers have gathered in large numbers for months (except when COVID-19 infections forced them to take unplanned recesses).

And as the end-of-session frenzy gripped them in late August, pandemic no-nos spiked: Lawmakers huddled closely, let their masks slip below their noses, smooshed together for photos and shouted “Aye!” and “No!” when voting in the Senate, potentially spraying virus-laden particles at their colleagues.

“It’s terrible role-modeling,” said Dr. Sadiya Khan, assistant professor of cardiology and epidemiology at Northwestern University. “Why do we have to do this if they’re not doing it?”

Legislative leaders are divided on whether remote voting violates the state constitution. Nonetheless, it was authorized — should it be needed — on a limited basis by both chambers in late July.

In the last week of the session, the Democratic leader of the state Senate ordered 10 Republican senators who lunched together to vote via video after one of them, Sen. Brian Jones (R-Santee), announced he had tested positive for the coronavirus. The lone Republican senator who did not dine with them was allowed to vote on the floor.

But the remote-voting option didn’t extend to others such as Assembly member Buffy Wicks (D-Oakland), who brought her newborn onto the floor for a late-night vote on Aug. 31.

.@BuffyWicks should’ve been home with her baby voting by proxy. That she came to #caleg is a testament to her but it didn’t have to be this way. Expecting + new moms can be “in the room where it happens” by being in the zoom where it happens. #WeSaidEnough https://t.co/Bh00nohICv

Lawmakers insist the guiding forces behind their decision-making have been “science-based protocols.”

But the science is pretty clear: Stay home, wear a mask that covers your nose and mouth, wash your hands and keep at least 6 feet away from people indoors. Maybe let your pregnant and nursing colleagues work from home.

Here at California Healthline, we let science and data guide our decisions, so we ran some of the legislators’ behavior by epidemiologists and infectious disease experts.

This isn’t (solely) to COVID-shame our elected officials for violating local, state and national recommendations governing how to conduct themselves in a pandemic — while crafting and debating the laws that govern our lives. Instead, we aim to be constructive. The pandemic rages on, and lawmakers may face similar conditions when they return in December to swear in newly elected members, or possibly sooner if Gov. Gavin Newsom calls for a special legislative session this fall.

Health officials have pleaded with the public to stay home when possible to minimize the spread of COVID-19. The virus, they say, is extremely contagious, especially indoors.

But elected officials around the country continue to meet in person.

In California’s Capitol, everyone must wear masks, the number of visitors to the Assembly and Senate floors were limited to provide more social-distancing space among members, and plexiglass dividers were installed in both chambers.

“These are absolutely unprecedented times in the California State Senate, and there was no prior experience with live remote voting or participation,” Senate President Pro Tem Toni Atkins said in a statement to California Healthline. “So, we proceeded with a method that maximized participation while respecting public safety and meeting the legislature’s constitutional duties, which, as you know, private businesses do not have to consider in their remote decision making.”

Despite the precautions, congregating indoors is not wise, public health experts say.

“I don’t think it’s a good idea for any large group to have gathered, even if you were all wearing masks in an indoor environment,” Khan said. 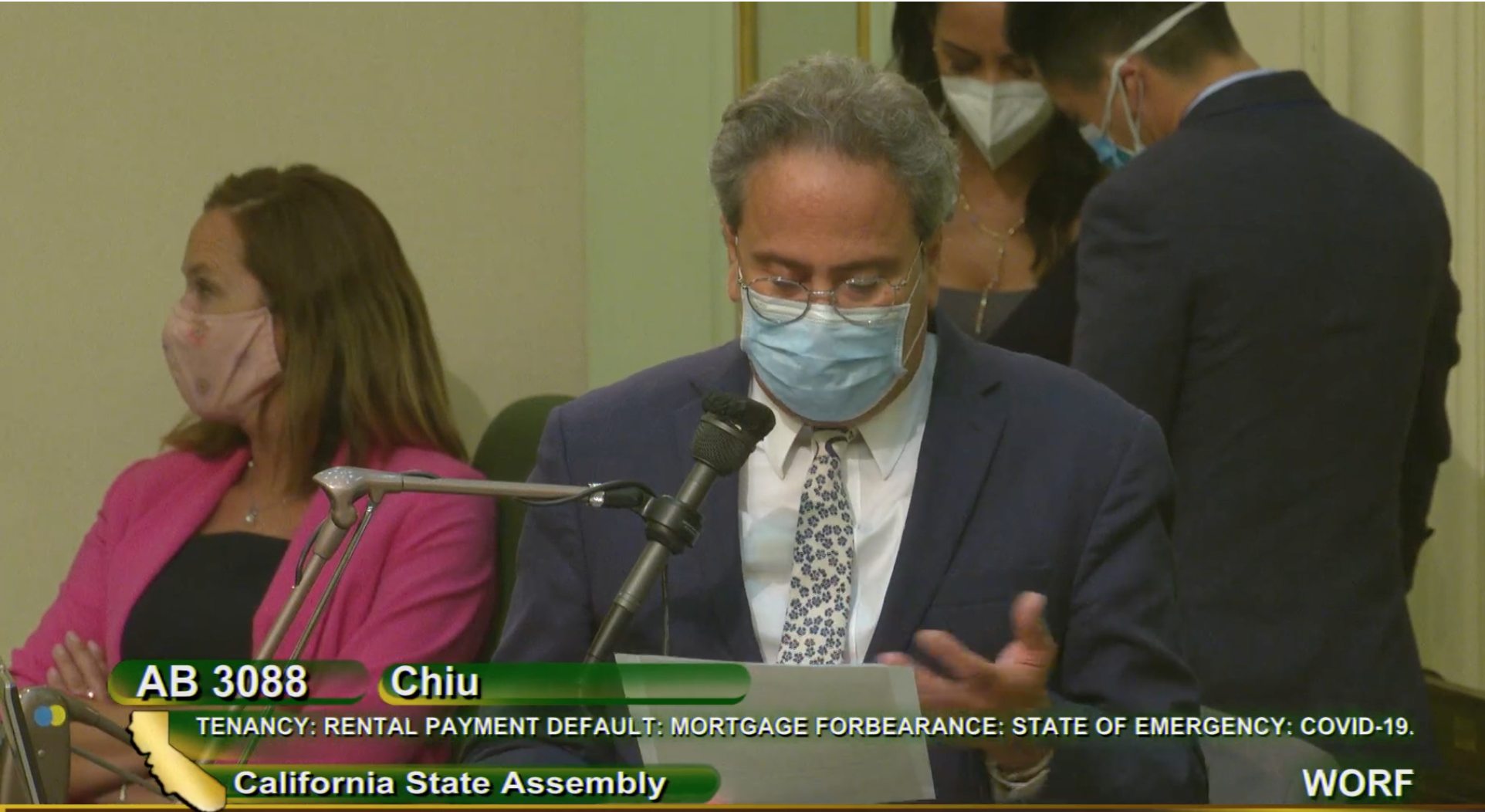 “We know that wearing a mask — consistently and correctly — substantially reduces the risk of coronavirus spread but certainly does not eliminate it,” said Dr. Leana Wen, an emergency physician and visiting public health professor at George Washington University. “And in this time of a pandemic, we should all be doing what we can to switch to virtual meetings and gatherings, when possible.” 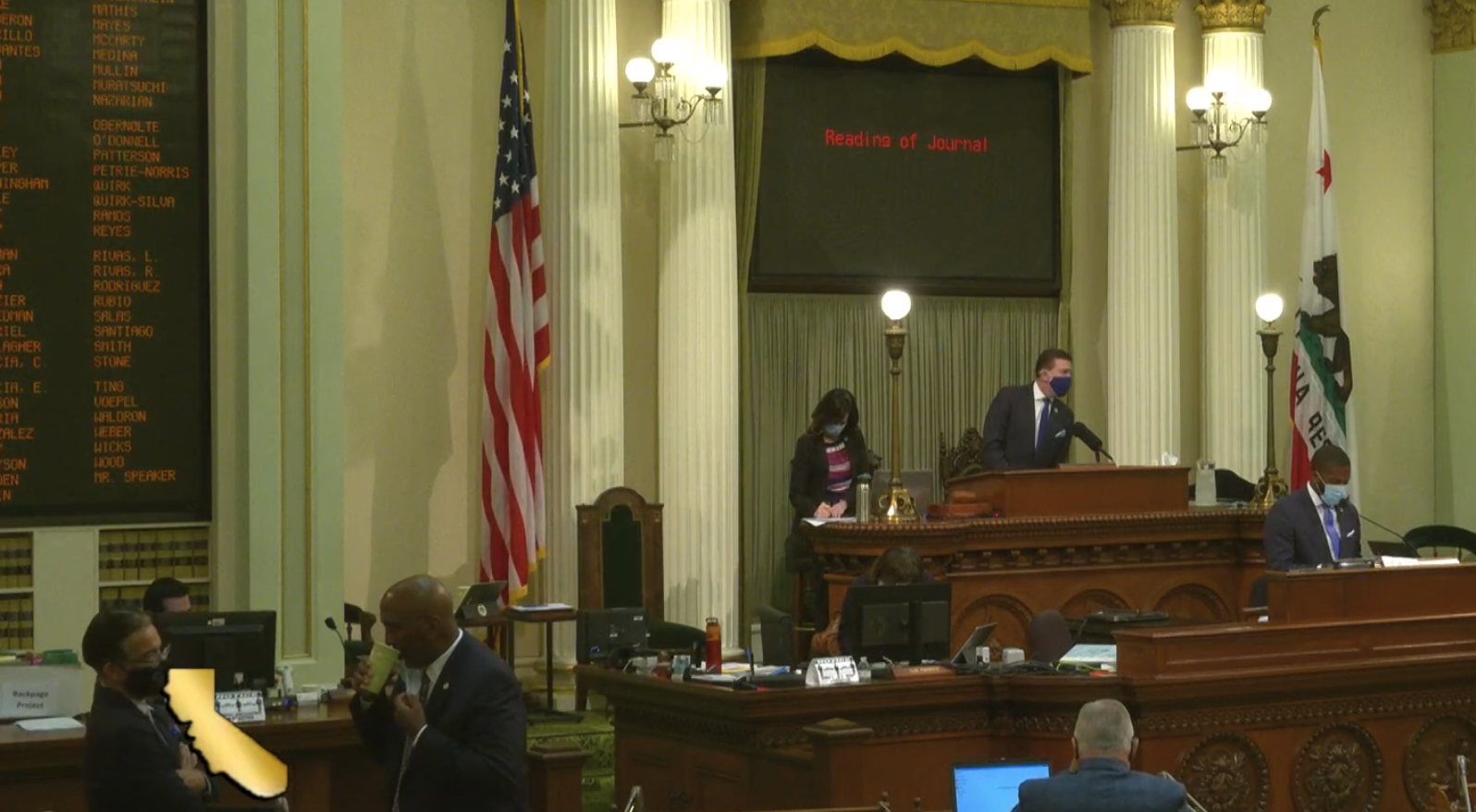 Some didn’t wear masks that properly sealed their faces, or pulled their masks down to sip coffee. Impassioned senators yelled to cast votes, while their colleagues in the Assembly quietly voted at their desks by simply pushing a button. And lawmakers in both chambers huddled closely to confer.

“Physical distance is quite important, actually,” said Dr. George Rutherford, a professor of epidemiology and biostatistics at the University of California-San Francisco. It’s the “second layer” of protection after masks, he said.

“I realize it doesn’t lend itself well to this kind of business, but you have to figure it out,” he said.

Thank you Majority Leader @IanCalderon for your incredible service to our legislature & all Californians! You’ll be dearly missed but you’ve earned some well deserved quality time with your family. I know we’ll see you in service again. Until then, wish you nothing but happiness! pic.twitter.com/phXFcXVPKf

Lawmakers, Rutherford noted, are prone to dramatic speeches and like to yell passionately into microphones to make a point, which is not particularly good behavior under COVID.

“I mean, the louder you talk, the greater your exhalational force, the more likely you are to overwhelm the protections of the mask,” he said.

The Cry Heard ’Round the World

A baby’s cry from the Assembly floor triggered national rebuke of California’s legislature. When Wicks came to the floor to vote on a housing bill Aug. 31, her month-old daughter, Elly, wasn’t pleased that her late-night feeding had been interrupted.

Wicks had asked Assembly leadership if she could vote by proxy but was told she was not at high risk for COVID-19. Assembly Speaker Anthony Rendon later apologized.

“Inclusivity and electing more women into politics are core elements of our Democratic values,” Rendon said in a statement. “Nevertheless, I failed to make sure our process took into account the unique needs of our Members. The Assembly needs to do better. I commit to doing better.”

The photo of Wicks holding her swaddled baby in her arms went viral — a rallying cry for mothers across the country balancing the demands of work with children at home. Plus, requiring that she appear in person was not only unnecessary, Wen said, but dangerous.

“Newborns are extremely high-risk because they have no immunity, other than the immunity that they obtained from their mother, said Wen, who is the mother of a 5-month-old. “Every employer, every entity needs to do everything they can to be flexible during this time of a pandemic.”

Why Not Legislate Virtually?

Congress continues to gavel into session in person, and many state constitutions require legislatures to meet in person. At least 30 states have allowed remote voting, extended bill deadlines or made other legislative accommodations since the start of the pandemic, according to the National Conference of State Legislatures.

Only Wisconsin and Oregon already had rules in place for remote voting in case of an emergency.

California dabbled with online hearings this spring and summer and witnesses testified remotely. There were the usual trip-ups: mute buttons still engaged, a crackly phone line or a lawmaker caught uttering a bad word.

This moment says everything about 2020. State Sen. @ScottWilkCA, struggling with mute on his Zoom voting in Senate session, looked to have mouthed one of those not-so-nice words in frustration. The chamber laughed and his face was priceless.

Senator, thanks for this moment! pic.twitter.com/2yphFgOp3M

But the technology is available to conduct the people’s business, and public health experts urged lawmakers to consider updating their rules.

“It’s not the same as being in person for sure. It is really hard to accomplish things the same way,” Khan acknowledged. But “in 2020, we’re very blessed with a million different ways to remotely interact for video and audio that should be explored and exhausted before saying that there is no better option.”